I have been busy lately on a few big builds and have managed to find some time to do some upgrades to the engine dyno that I have been wanting to do for too long.  While some of the upgrades are purely practical and allow engine changes to be quicker, I have also added significant over capacity to the cooling system to engine temperatures can be optimised. 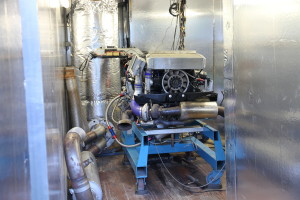 I have become really interested in the fuel testing lately and comparing different race fuels.  I have added a flex fuel sensor to the dyno now which show how the ethanol content some of the cheaper competitors race fuels have and the consistency (or lack thereof!) !  It is a cheap way for them to increase knock resistance but it isn’t the best way of producing power… 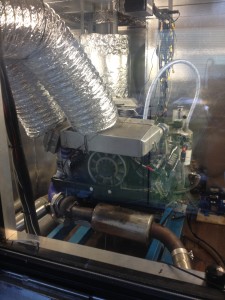 I have upgraded the knock sensing in the cell as well.  In addition to the two channel Vipec knock amplifier and headset, I have added a dedicated vibration sensing module.  It is now easier to fine tune the knock sensors on a setup so there is less false readings and make it easier and faster to setup individual cylinder tuning.  The new system will also analyse the vibration signature of an engine over time (FFT) and will show well balanced the engine is and the point of the imbalance.  By looking at the spectral analysis you can distinguish the imbalance from a weak cylinder, a clutch or the cooling fan etc.  Cool stuff!

Just need a more room on the console for all the readouts and instrumentation now!  Maybe a lounge chair as well.